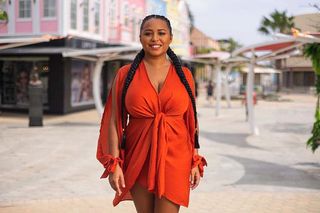 Former 90 Day Fiancé star Tania Maduro has recently posted her new explicit look on her Instagram after splitting with her ex-husband, Syngin Colchester. Syngin and Tania were first featured on the show in 2019.

Since the couple did not have much compatibility with each other, the viewers were pretty obvious about their relationship breaking off by the end of the season.

The couple surprised all their fans by getting married to each other for two years. But the couple returned on 90 Day: The Single Life season 2 and revealed their split.

A famous entertainer who is mainstream for her appearances and acting in the popular Netflix arrangement named 90 Day Fiance. She holds an American nationality and is black by ethnicity.

Born and brought up in the United States of America, this actress has successfully embarked on her position in the entertainment business.  Read more: Is Never Have I Ever Actor Darren Barnet Dating Mikaela Hoover? Take a Look at Their Relationship

The famous TLC series 90 Day Fiance featured the couple Syngin and Tania together. Both the duo fell in love and tied the knot during season seven, but recent split news has covered all the headlines.

The speculations have even more fueled when the video was shared of Syngin with his rumored girlfriend called Erin.

Since the South African native, appeared very eager to date again, this led Tania Maduro disappoint and seemed very hurt by his actions and gestures.

A post shared by 90 Day The Melanated Way (@90daythemelanatedway)

It was very obvious that the couple’s split was not mutual and Syngin Colchester moved out of Tania’s residence, he soon settled down in Arizona. Not much time after, he introduced his new mystery woman to everyone.

The duo was last seen together in 90 Day: The Single Life season 2, during which all their fans found out their reason for breaking up with each other. The reason was pretty mutual and it looked like Tania Maduro was having many difficulties moving on.

While Syngin Colchester went on to a couple of dates during 90 Day: The Single Life season 2 and soon relocated to Arizona, where he was spotted hanging out with many other women.

After her ex-husband, Syngin Colchester’s girlfriend was revealed, Tania shared a very sexy and racy new picture on Instagram. In the picture, Tania can be seen wearing a green bikini and looks very beautiful in her natural skin tone and figure.

Along with the picture, Tania Maduro used the hashtags “#lifewithtania” and “#singlelife”, showing everyone how much she is enjoying her single life.  Even after the devastating split with her ex-husband, she is now ready for her new journey and a new chapter of her life.

Tania Maduro has now a more pretty glow on her face, and she seems much happier after the separation from her ex-husband.

At first, 90-Day Fiancé fans were not much fond of Tania Maduro when she was first featured on the show. She was initially called out for leaving Syngin alone in the United States for taking a business trip to Costa Rica. But as of now, Tania has been receiving many positive comments and commenting on her glow.

Since then, she has been getting a lot of attention on social media. Fans interested in Taia’s journey of her private and personal life can go check her official Instagram account named as- @tania.maduro.

Tania Maduro has called out the show for revealing what work she had been doing for a living while she was filming season 7.

Tania, who was featured in the 2019 TLC show, is now no longer together with her husband Syngin Colchester.

Her relationship with Syngin began during a trip to South Africa. However, in the end, she fell for a charming bartender called Syngin, with whom she had a one-night stand.

But later, they got married and also had matching tattoos instead of exchanging rings. Although, the marriage was also followed by many fights and arguments which led them to split their ways.