Who Is Kiera Bridget Dating? She Is in a Relationship With Her Boyfriend, Caylus 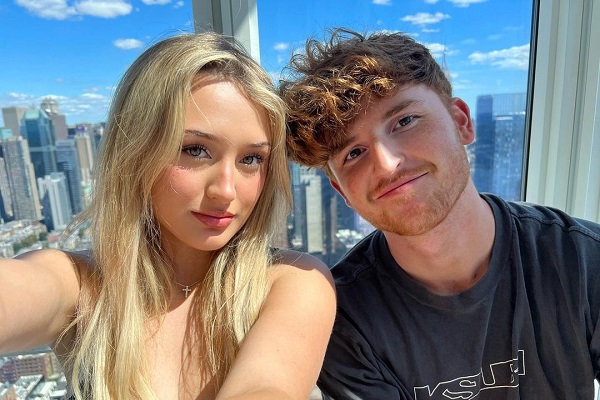 Kiera Bridget is a renowned American YouTuber who has collected more than 4.1 million subscribers on her self-titled YouTube channel. Besides running her own channel, Bridget also joined the supremely popular collaborative YouTube channel called Trash.

Likewise, Bridget has a gaming channel that has amassed over 424k subs. Moreover, Bridget is known not only on YouTube but also on other social media platforms like Instagram. From her Instagram handle, she shares her lifestyle.

Bridget is currently in a relationship with her boyfriend, Caylus. Also, Bridget posts images with Caylus on her Instagram handle. So, here you will get to know everything about her love life, including the rumors of her being pregnant.

Kiera Bridget is currently in a relationship with her boyfriend, Caylus. Bridget and Caylus have been in a romantic relationship for quite a while now. Caylus, better known as Infinite, is a well-known content creator famous for his commentary and reaction videos on his Infinite YouTube channel.

According to YouTube Fandom, Bridget and Caylus began dating following Bridget's breakup with her ex-boyfriend. Their relationship was made official on January 2020. Since then, they have been together, and there is no sign of separation.

Moreover, Bridget and her boyfriend Caylus have good chemistry, and the couple does not hesitate to show their relationship in the media. Both of them often post images on their social media handles. Both of them are currently busy with their professional life, and their wedding details remain under review.

Once, Bridget was rumored to be pregnant with her first child. So, let's get to know more about the rumor of her pregnancy.

Click To See: Who Is Love and Hip Hop Cast Mariahlynn? Details on Her Family, Relationship, and Net Worth

Is Kiera Bridget Pregnant With Her First Kid?

No, Kiera Bridget is not pregnant and is not expecting a child. The rumor of her pregnancy began in 2020 after her relationship with Caylus was made official. In the same year, they posted a photo on Instagram in which Caylus was kissing Bridget's tummy, which left viewers thinking that they might be expecting their first child.

But there is no fact about it, as Kiera and Caylus do not have any kids yet. If there is such news about their pregnancy, we will give you more updates. Also, Bridget may give some news in the future so that we can follow her on Instagram as @kiera. Besides that, she was in a relationship in the past with another guy.

Also: Vanessa Lengies Is Rumored To Have a Boyfriend! Is She Married?

Caylus is not the first love of Kiera Bridget as she was in a relationship with Morgan Hudson. They met each other in September 2017 at an event held by YouTube. Shortly, they got to know each other and later began dating.

Online sources report that Bridget and Hudson had an on-off relationship for two years. After that, they separated in mid-2019. Apart from that, Caylus was also in a relationship with a lady named Jasmine H. Now, Caylus and Kiera are doing well in their life.