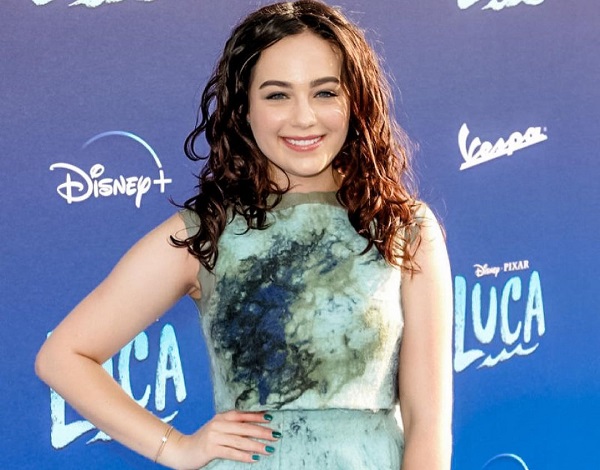 Mary Mouser is a talented actress from the United States of America who gained widespread recognition after appearing in Son of the Mask, Cobra Kai, Hollywood Mom, and The Devil You Know.

Since making her debut with the tv series, Without a Trace in 2004, Mouser has been in the showbiz industry and has worked in multiple films and television series.

The young actress has already shared the screen with various renowned figures and has gained tremendous experience.

Furthermore, Mouser has not only gained name and fame for her work but also some honors, including a nomination for the Blimp Award in 2022 for her role in Cobra Kai.

Well, just like her professional life, her personal life has also been a matter of concern to many of us. So, in today's writing, we've talked about her relationship with her boyfriend.

Is Mary Mouser Single or Dating?

Mary Mouser is currently dating her beloved boyfriend, Brett Pierce. Not to mention her boyfriend, Pierce, is also a well-known actor who has worked in various movies.

So, it is pretty clear that this gorgeous woman is not single.

The lovebirds met each other for the first time at a party on November 11, 2015. Since they crossed paths, both of them got attracted to each other. It is reported that Pierce was the one to make the first step.

Just after knowing each other for some time, Pierce and Mouser began their romance. Ever since Pierce is retained as her boyfriend.

So, since 2015, the pair have been in a relationship, and we can see multiple snaps on their social media accounts. The duo also shares their anniversary posts on Instagram.

But today's concern of people is to know about the rumors of their breakup. Probably because a lot of the news articulated regarding Mouser and her boyfriend's breakup.

As said earlier, the rumors of Mary Mouser and Brett Pierce's breakup have taken over the internet for some time now. As we know, Mouser and Pierce used to make various posts on their social media accounts.

But some of them cant be found at the moment; it can be said that it has been deleted. Due to this reason, rumors of their separation have been circulating on the internet.

For your information, Mouser's last post with her boyfriend was made on December 26, 2019, while Pierce last posted on August 29, 2020.

Since then, the duo has not made any posts together, which has created more confusion among people. It has just remained as rumors as Mouser and Pierce have not made any comments regarding this topic yet.

So, it can't be confirmed whether the rumors of their breakup are true or not. Meanwhile, Mouser has shared multiple snaps with her co-stars on her Instagram handle, which left people to think that she may be dating one of them.

So, let's talk something about that.

You may be interested in: Who Is Peyton List Dating Now? TikTok Video Sparks Dating Gossips with 'Cobra Kai' Co-star

Moving onwards, there are no records of Mary Mouser dating other guys, but she has been linked with some actors.

Mouser shared the screen with Joe Seo in Cobra Kai (2018). So, people have thought that she may have dated Seo, but there is no fact about it.

Likewise, Mouser had an on-screen romance with Xolo Mariduena and Tanner Buchanan in the same television series.

Their relationship is just on the reel, but in real life, all of them share a strong bond, and they appear to be good friends.

In the same way, Mouser has shared multiple snaps with Mariduena and Buchanan on Instagram. They have appeared in various events together, from which it can be said that they share a strong bond with each other.

To get more updates on the ongoing life of Mouser, we can follow her under the username @missmarymmouser.