By Dipesh Katuwal
Published:  May 18, 2021
American actress Peyton List's personal life has been around the question ever since her last relationship. But, her latest TikTok video seems to clear that all as it sparks dating rumors with her fellow Cobra Kai co-star. So, who is the handsome? Keep reading to find out!

American actress Peyton List has earned huge limelight for her portrayal of Emma Ross in Jessie (2011-15) and Bunk'd (2015-21). Currently, she is making headlines for her amazing performance of Tory Nichols in Cobra Kai (2019-21).

Peyton’s professional career is crystal clear thanks to her public image, but, when it comes to her private life, she has managed to keep those details behind the curtains. For years, her fans have had only a few tidbits to talk about her personal life.

However, it now seems that there is a lot more to take about. The sudden change came when the 23-year-old actress posted a TikTok video on Friday, May 14, 2021. In the video, she was asked who was her favorite character from the Cobra Kai series.

While replying to that, the actress shyly and softly said that Hawk is her favorite character. “Hawk. Hawk is my favorite character in Cobra Kai,” said Peyton. In the Cobra Kai series, Hawk is portrayed by the handsome Jacob Bertrand, with whom Peyton has already shared the screen in a Disney TV Movie titled The Swap.

Moments after the video was posted on Peyton’s TikTok account, fans of her and Jacob thought that the two are dating each other. Also, many instantly noticed the actress’s repeated side-eye and wondered if Jacob was in the same room with her when she made the video.

Likewise, they took to the comment section of the video and dropped their opinions. One Tiktok user wrote, “Bruh we all know that you guys are dating.”

Not only the comment section of Peyton’s TikTok video but the social media site Twitter was also filled with the two star’s fans speculating if Peyton and Jacob were dating for real.

A Twitter user wrote, “Um not me just finding out that Peyton List and Jacob Bertrand are dating… I AM HERE FOR IT.”

Another user implied the two rumored duo’s former working relationship in The Swap as they wrote, “I legitimately forgot that Peyton List and Jacob Bertrand were in that Disney Channel movie together before Cobra Kai.”

Well, with all those speculations going around, it is still not sure if the two co-stars are even dating, without them giving official confirmation. Let’s just hope for the best!

You May Also Like: 'RHONY': Who Is The 'Pita Chip' Guy? Leah McSweeney's Relationship With Him

Was Peyton Dating Anyone In The Past?

Before all of the gossips that links her to Jacob Bertrand initiated, the Florida native actress was engaged in a romantic relationship with a fellow actor named Cameron Monaghan. The now-former couple first met each other during the filming of a movie named Anthem of a Teenage Prophet.

They became close with each other and officially began their relationship in 2017. Since then, the duo’s together was witnessed freely as they made several public appearances together. Not only that, but they also featured each other on their respective Instagram handles. 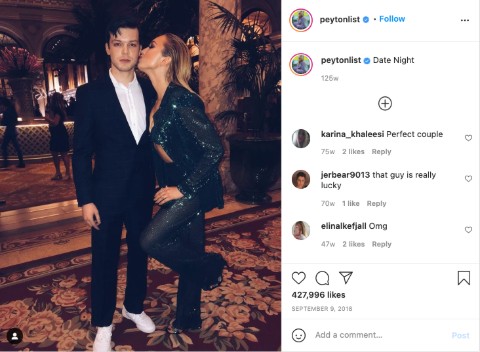 A snap of Peyton's since-deleted Instagram post in which she was kissing her former boyfriend Cameron (Source: thecinemaholic.com)

However, as time passed, their relationship started to turn sour and their bond became weak. After two years of togetherness, in 2019, the two stars quietly ended their relationship. In January 2019, Cameron shared a tweet thanking Peyton for two wonderful years and wishing her the very best for the future. As the two were no longer together, their fans took the now-deleted tweet as an official breakup announcement.

Ever since then, there have been no talks about Peyton’s relationship, until she was recently linked to her co-star Jacob Bertrand.