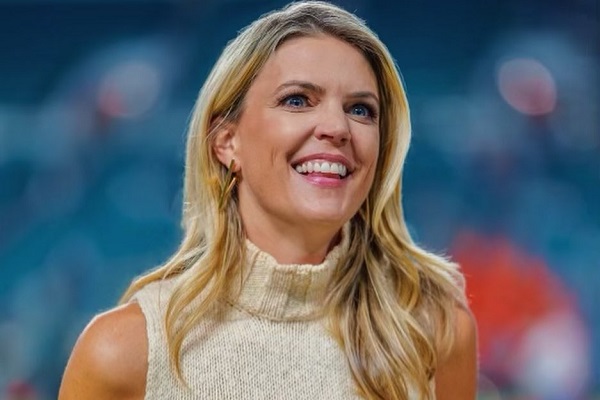 Furthermore, Stark has been working in this field for a long time and has gained broad experience by working at different companies. Also, she has been described as a trailblazer who paved the way for women in sportscasting. Moreover, Stark is a married lady, and she is living out her own fairytale in her everyday life, both personally and professionally.

Let's get to know everything about her, starting with her early life.

Melissa Stark was born on November 11, 1973, in Baltimore, Maryland, United States, making her age 49 years. Her father, Walter Stark, is an eye surgeon who served at the Wilmer Eye Clinic at the Johns Hopkins Hospital.

Stark also did intern at the CBS Evening News with Dan Rather. Later, she began her professional career by joining ESPN.

Click To See: Are Jesse Meester and Jeniffer Tarazona From 90 Day Fiance Still Together?

Who Is Melissa Stark Married To? Details on Her Husband

Melissa Stark is a happily married lady. Stark lives a blissful life with her husband, Mike Lilley. Like many couples, Stark and Lilley also dated each other for some years, and Lilley took the first step.

It is reported that Stark's husband proposed to her around 2000. Later in 2001, the couple married, and since then, they have been sharing the relationship of a husband and a wife. Furthermore, Stark and her husband prefer to live a low-key life, due to which there are not many details about their married life.

Being a married couple for a long time, Stark has also started a family of her own with her husband. Stark and Lilley are the proud parents of four children, two sons, Michael Lilley Jr. and Jackson, and twin daughters named Clara and Clementine.

Moreover, Stark is a family person who likes to spend most of her spare time with her husband and kids. Also, she has shared multiple snaps with them on Instagram, where we can follow her as @melissastark. Being active in this field for a long time, Stark has preserved a considerable fortune, and her net worth is pretty impressive.

How Much Is Melissa Stark Net Worth?

According to Celebrity Net Worth, Melissa Stark is estimated to have a net worth of around $3 million. All of her income came from being a sportscaster. Stark has served in different outlets, which have helped her increase her bank balance.

Stark has served at ESPN and later moved to work at ABC Sports. Likewise, she has been a part of N.B.C. for many years. In the United States of America, a person working as a sportscaster has an average salary of $53193. Meanwhile, the range may also fall between $39894 and $66490.

So, we can say that Stark may earn above the average wage as she has been in this line for a long time. No doubt, her income will increase in the coming years. The 49-year-old Journalist flaunts her life via her Instagram account.