Muni Long Married to Her Husband: All About Her Pregnancy Rumors 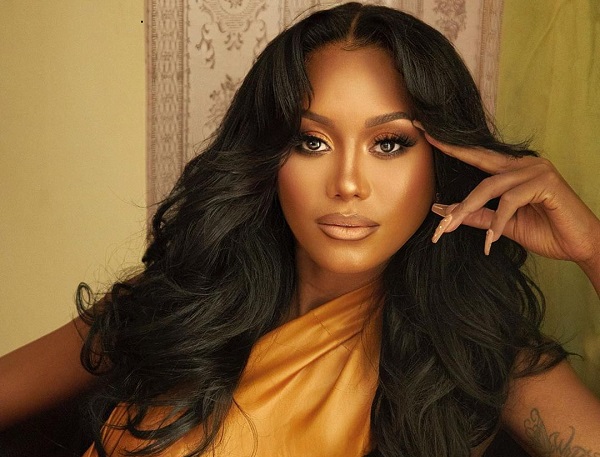 Muni Long, whose real name is Priscilla Renea Hairston, is a well-known singer and songwriter from the United States who gained widespread recognition for her songs, such as Lovesick, Kiss Me, Heavenly, Family Tree, and Hrs and Hrs.

Since 2007, Long has been making music professionally and has worked with many renowned figures in the industry.

Her career started on YouTube and gained people's attention just at the age of 21.

Shortly, she got signed with Capitol Records. In 2009, her debut studio album named, Jukebox, was released.

Meanwhile, Long made her appearance at BET Awards 2022, which left many people to think about her pregnancy.

Starting with her love life, Muni Long is leading her life as an immensely happy wife cherishing love with her beloved husband, Masimba Chibanda.

The now, husband and wife first met each other in a Taco restaurant. Shortly, they got attracted to each other and fell in love.

Furthermore, Long and Chibanda dated each other for some years and later thought of taking their relationship to the next level. So, in 2014, the pair walked down the wedding aisle and got married in the presence of their family and close ones.

From a couple dating to bonding themselves as a husband and wife, they paved a long way.

Since then, they have been cherishing the life of a husband and wife. Meanwhile, her husband, Chibanda, is a very private person, and he has not appeared much in the media.

They might have gotten married but they ensure to keep their personal life as low-key as possible.

Long, being a lovely wife has made sure of not publicizing her married life alongside her husband while respecting his privacy.

So, there is very little info about him. But once, he also gained people's attention after the rumors of Long's pregnancy circulated on the Internet.

Read More: Kayce Smith Is  Now Pregnant: Who Is the Baby Father? More on Her Boyfriend

No, Muni Long is not pregnant at the moment, but the rumors of her pregnancy circulated when she appeared at BET Awards 2022.

She walked the red carpet wearing a pink and red cushioned gown by Carolina Herrera. Her dress was lifted, due to which she grabbed everyone's eyes who were present at the event.

And people instantly began speculating that Long might be pregnant, and she was wearing that dress to hide her baby bump.

The pictures also went viral on the internet, but Long didn't make any comments regarding the topic. But she had also shared some moments of the Bet Awards 2022 on her social media handles.

When Long shared some other snaps on her social media account, then the rumors of her pregnancy were addressed, and it was known that she was not pregnant. But does she shares any kids with her husband? Let's explore.

How Many Kids Does Muni Long Have?

Well, Muni Long does not have any kids, and she has not given birth to any child despite her marriage to her husband. Long have been in a marital relationship with Masimba Chibanda for over seven years, but there is no news of them welcoming their child.

However, the pair may be planning to start a family of their own. So, we just have to wait to get more information about this topic. Long may give some updates about it in the future via her Instagram handle, where we can follow her as @munilong.

But at the moment, she and her partner are both focused on their career and busy with their work schedule. From this, it also becomes clear that they do not have much time. Moreover, we wish them the best for their future.