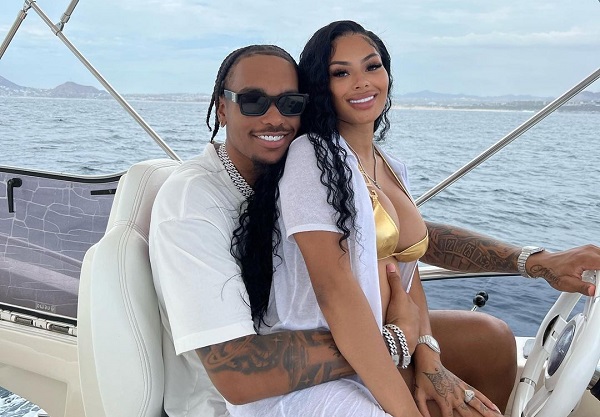 PJ Washington is a professional basketball player playing for the Charlotte Hornets of the National Basketball Association (NBA) who is in the limelight as he recently proposed to his girlfriend turned fiancee, Alisah Chanel.

She has worked with various brands and has also worked as a brand ambassador and host of events.

Currently, Washington and Chanel have become the talk of the town as Chanel flaunted her diamond ring on her Instagram handle, from which we can confirm that the pair are now engaged and they might be planning to get married soon.

So, in today's writing, we will talk about their relationship and more.

PJ Washington Pulls Out a Diamond Ring for Engagement

Well, PJ Washington and his girlfriend Alisah Chanel have turned their relationship to the next level as they recently got engaged.

The professional basketball player proposed to his fiancee with a massive diamond ring which Chanel flaunted on social media.

Chanel recently took to Instagram to announce her engagement with her partner. In the post, she showed her amazing diamond ring and wrote,

The post instantly got huge people's attention as many of them were shocked to see the big diamond ring. After that, people began congratulating the couple, and her partner, Washington, also gave a kiss emoji in the comment section.

Furthermore, Washington and his girlfriend have not announced anything about their marriage yet. So, they might be planning it, and it may be a surprise to all of their fans.

Talking about their dating life, Washington and Chanel have been in a relationship for a long time, and they used to post images on their social media handles regularly.

Recently, Chanel also celebrated her 24th birthday. And on her birthday, it seems like Washington gifted her a Mercedes Benz G-Class.

The lovebirds posted the car's pictures on Instagram. Apart from their engagement, fans are also concerned about the couple having a baby.

The pair have already announced that they are expecting their first child together. So, Chanel has also posted some images on her IG account showing her baby bump.

For your information, Alisah Chanel is not the first love of PJ Washington, as he was previously in a relationship.

In the past, Washington was in a relationship with Brittany Renner.

The former pair also shares a son who was born in May 2021. Just after a week of giving birth to a child, Washington and his ex-girlfriend broke up.

It is also reported that Renner had lured Washington to pay her $200,000 in child support.

But a source reported that she just gets $2500 monthly for child support. Apart from that, Renner also got into the spotlight after the engagement of Washington and his fiance as Renner congratulated the pair saying, "Congrats y'all!!!"

Some of their followers were shocked to see the comment, and they also replied being rude to Renner. However, some of them were happy to see the congratulatory message from Renner.

Alisah Chanel Shares A Son From Her Previous Relationship

Moving onwards, Alisah Chanel was also in a relationship in the past, but there is not much information available about it.

However, she is also a mother of a son, and she often features him on her Instagram profile, where we can find her as @alisahchanel_.

And now, Chanel is becoming a mother for the second time as she is pregnant with her fiancee, PJ Washington.

Finally, we, the team of Celebrityshine, also wish them the best for their future and their love life.