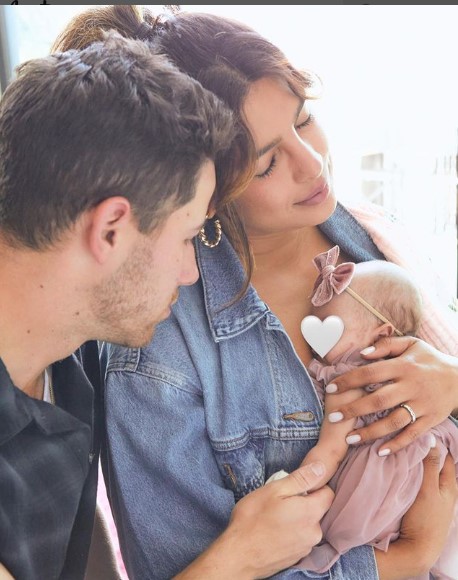 The megastar couple Priyanka Chopra and Nick Jonas have finally welcomed their baby girl. In a heartwarming post shared by the 2000 miss world, Priyanka revealed that the duo had brought their daughter home after spending 100 plus days in the NICU.

Born on 18 July 1982, in Jamshedpur, Bihar (now in Jharkhand), India, Priyanka Chopra Jonas is presently 39 years of age. Chopra was born to parents Ashok and Madhu Chopra who are both physicians in the Indian Army. The actress also has a younger brother named Siddharth Chopra.

The celebrated Indian actress, singer, and model are one of the country's highest-paid actors.  In 2016, Priyanka Chopra was honored by the Government of India with the Padma Shri. Additionally, Time a.so named her as one of the 100 most influential people in the world.

Born September 16, 1992, Nicholas Jerry Jonas, or simply Nick Jonas is an American singer, songwriter, and actor. The 29-year-old singer formed a band with his brothers Kevin Jonas and Joe Jonas called the Jonas Brothers. The brothers were initially signed with Columbia Records. In 2013, the Jonas Brothers disbanded and Nick began to work on his second solo studio album.  In 2014, Priyanka Chopra's husband Nick signed with Island Records and released Nick Jonas through the label.

Nick Jonas is the third son of Denise and Paul Kevin Jonas. Hailing from a family with a musical background, it's safe to say Nick was destined to be a singer. His father is a songwriter, and musician, as well as a retired ordained minister at an Assemblies of God church. Nick Jonas's mother is a retired sign language instructor and also a singer. Besides, the singer also has a younger brother named Frankie and two older brothers; Joe and Kevin Jonas.

The gorgeous duo started to date one another in May 2018. 2 The same year on  July 19, 2018, a day after celebrating Priyanka's birthday in Crete, Greece, Nick Jonas got down on his one knee and proposed to her. 1 month later in August, the couple held their engagement in a Punjabi Roka ceremony in Mumbai.

In December 2018, the couple got hitched in traditional Hindu and Christian ceremonies amidst their family and friends at Umaid Bhawan Palace, Jodhpur.4 years after their marriage, the couple revealed in January 2022, that they had welcomed their first child via surrogacy.

On the occasion of mothers day on 8th May 2022, Priyanka Chopra and her husband Nick Jonas both shared the news about their baby to their fans and followers via their Instagram accounts. The couple revealed that they had spent more than 100 days in the NICU and were finally able to welcome their baby girl home.

The duo also thanked every doctor, nurse, and specialist at Rady Children’s La Jolla and Cedar Sinai in Los Angeles who took care of them every step of the way. The Indian actress even mentioned her husband saying,

Also.. there is no one I’d rather do this with than you. Thank you for making me a mama @nickjonas I love you

Babe, you inspire me and every way, and you are taking to this new role with such ease and steadiness. I am so grateful to be on this journey with you. You are already an incredible mother. Happy Mother’s Day. I love you.

The new parents who welcomed their baby daughter through surrogacy have finally revealed their baby's name to the media. According to TMZ, the duo has decided to name their daughter Malti Marie Chopra Jonas. According to the birth certificate acquired by the online news, Nick Jonas and Priyanka Chopra Jonas's daughter Malti Marie was given birth after 8 p.m. on Jan. 15 at a San Diego hospital.