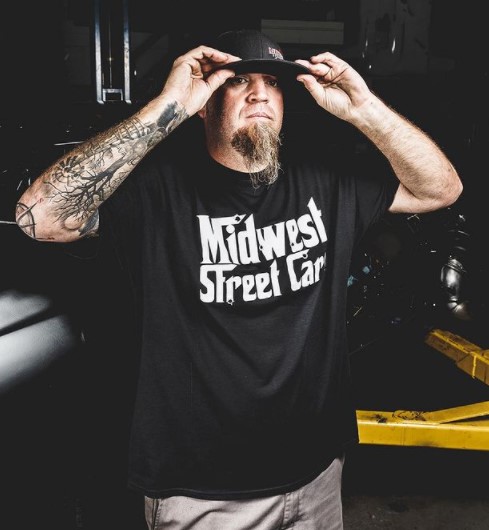 A racer as well as a reality TV star famously known by the name of 'Murder Nova', Shawn Ellington gained massive popularity after appearing on the show named ‘Street Outlaws’. The show is aired on the Discovery channel and features Oklahoma City's street racers who participate in a race to exhibit their driving skills as they contend against each other to win the title.

Born on  November 15, 1977, in Merced, California in the United States, the racer Shawn Ellington age is 44 years old. His zodiac sign is Scorpio. Ellington's ethnicity is white and his nationality is American. Not much is known about Shawn's parents and siblings. Likewise, our efforts to find out about his education were of no avail.

Ever since he was a kid, Shawn worked in a car body shop owned by his father Richard. It was there that he developed his fascination for cars and racing sports. Eventually, he went on to pursue his career in street racing and became widely known as 'Murder Nova' among his fans and the racing community.

Ellington's first appearance in the "Street Outlaws” was in 2013. Dubbed as the King of the Street, Shawn held the title for a long time until the arrival of Da and Daddi Dave. At the finish of 2016 at a Trade Show in Indianapolis, Shawn revealed that he was busy in the making of a new Murder Nova which sent his fans in a frenzy of excitement.

The racer assured that this new vehicle is safer and faster than his last Murder Nova despite the reality that it is more lightweight and has an additional grounded development. In mid-2017, Shawn finally showed the new Murder Nova to his fans. However, he was forced out of the 2018 series as the car didn’t perform as mandated by the guidelines.

Moreover, Shawn once even received an ultimatum letter from the National Hot Rod Association (NHRA) along with other superstar racers to cease partaking in street racing.

What Does Shawn Ellington Do For Living?

Besides being a street racer, the reality star is also the owner of his custom shop called 187 Customs. Shawn Ellington's 187 customs shop has online services where customers can purchase various products from his website. The racer's shop is intended on assisting customers to see their vision by helping them to customize their hotrod, street rod, or even their daily driver.

Also, read our article on:  A Look Into YouTuber Eugenia Cooney's Wiki, Age, Net Worth, And Personal Life

The street racer married his long-time girlfriend Erin in the winter of 2005. The duo gave birth to their first son Aiden on February 8, 2006. Like his dad, Aiden is also fond of cars. Shawn expressed that his family was one of his biggest blessings and nothing made him happier than them.

The professional racer's net worth was valued at  $700,000 back in 2019. We are pretty sure that Murder Nova's net worth must have increased since then. However. his salary at Street Outlaw is not known.