How Many Children Does Shemane Deziel Have With Her Husband, Ted Nugent? More on Their Dating Life 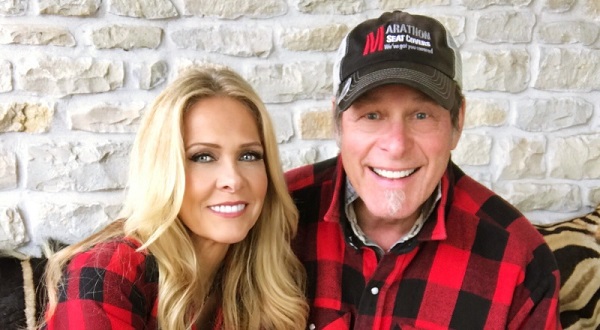 Shemane Deziel is a talented author and also a fitness trainer and yogist.

Besides that, she is also a TV producer, director, and motivational speaker. She got more into the spotlight after marrying Ted Nugent, a well-known American singer, songwriter, guitarist, and activist.

The lovely couple has been leading a married life for many years, and they still live together, supporting each other.

Apart from being known for her personal life, Deziel has established a name for herself.

For your information, Deziel is a three-time published author of best-selling books, including Rock n Roll Your Way To Happiness. Being married for a long time, the pair have also started a family of their own.

So, here we've talked about her dating life and more. Keep reading to find out everything about their married life.

Shemane Deziel and Ted Nugent have been in a marital relationship for a long time, and they are still going well.

The cute couple met each other for the first time at a radio station named WLLZ-FM. During that time, Deziel was working there as part of the newsroom staff.

And Ted was at the radio station for an interview. When he saw Deziel, he immediately fell in love with her. But Nugent was not the only one to like as Dezeil also fell for Nugent.

So, both of them have mutual feelings for each other.

After knowing each other for some time, they dated and finally married in the year 1989.

Since then, they have been together, and despite having some years of an age gap, they are still together.

Deziel and Nugent celebrate their anniversary in the month of January as they got married in the same month of 1989.

Furthermore, they have also been supported in every step of their life.

In addition to that, Deziel and Nugent have made multiple public appearances too. Being married for a long time, the pair have also started a family of their own. So, let's get to know more about their family life.

More: After 4 Failed Marriages, Is Patsy Kensit Planning on Getting Married or Dating Someone Again?

How Many Children Does Shemane Deziel and Ted Nugent Have?

Well, Shemane Deziel and Ted Nugent have been married for three decades, and the adorable husband and wife duo is blessed with two children.

Deziel and Nugent became parents for the first time when Deziel gave birth to their son, Rocco Winchester Nugent, on July 22, 1990.

Rocco also followed the path of his father, and he is also an actor. The family of three was increased to four when the twosome welcomed their second child, Chantal Nugent.

Besides, Nugent is also the father of four other kids from his multiple relationships.

Furthermore, the family lives a quality life as both of them make a good sum of money from their profession but do you wanna know about their actual net worth?

Also: Who Is Will Firedle's Wife, Susan Martens? Insights Into Relationships & Married Life

Ted Nugent's Net Worth Is in Six Figures

As we know, Ted Nugent is a multi-talented personality who has preserved a massive fortune under his name. According to Celebrity Net Worth, Nugent is estimated to have a net worth of around $10 million.

Having such an impressive fortune, Nugent lives a lavish life. And a report shows that his main residence is located in his home state of Michigan, which also has a guitar-shaped pool. Similarly, he also owns a property based in Waco, Texas.

He is not just a good husband to his wife, but also a professional man who paves the path of success alongside.

In addition to that, his wife, Deziel, also makes a good amount of money from her work, and her income is surely impressive. She flaunts her lifestyle from her Instagram account, where she is verified as @shemanenugent.