Sommer Ray Modelling Journey! Insights on the Social Media Influencer’s Dating History: Does She Have a Boyfriend? 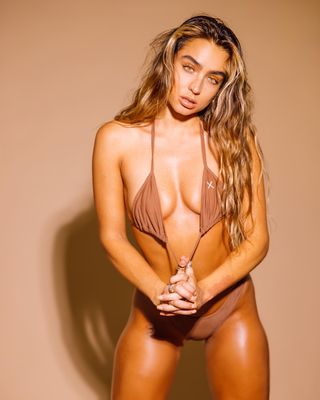 Sommer Ray, recognized as a sexy model and an Instagram influencer, seems to reach the top and has everything she needs right now.

A perfect body, with many followers, and a perfect list of handsome young ex-boyfriends, well, she has got it all.

Since a very young age, Sommer Ray has indulged in gym and fitness. Ray has also talked about the fitness regime on her Instagram. Her fans and viewers have loved and admired her dedication to having a healthy and beautiful body.

The influencer is well-known for her work and dedicated time, and her fans want to know more about her. So let’s look into her insights into her dating, boyfriend, modelling, and more.

Everything on Sommer Ray. What Is She Famous For?

Despite her extravagant success as an Instagram model, there is still more to know about Sommer Ray. Well, she is known for her sensual photoshoots, petite body, and healthy lifestyle.

Ray is called a fitness fanatic by her fans and it is no surprise both her parents are former bodybuilders. She herself works as a trainer in FitPlan. Ray, is also an entrepreneur.

The 24-year-old, who has over a million YouTube subscribers, recently launched her new beauty line named IMARAIS BEAUTY, her new brand, and she is considered a new entrepreneur in the business.

The model and Instagram influencer sell beauty products that are Plant-Based Skin Care Gummies and is a PETA-Approved Cruelty-Free company.

Ray started modelling when she was just a teen. In her 2018 interview with Forbes, she said in a very confident way that she has always been more expensive in a sexual way. But that doesn't mean she is like that as a person.

What many do not have an idea about Sommer Ray is that she gets all these fitness motives through genetics.

It is not just her modelling career that led her to obtain a body as such. Of course, staying retained in modelling requires a fit body and people try staying in shape.

But in her case, she has gotten things naturally.

She gets her passion for fitness from both her parents. Ray was trained by her own father, and at the age of 16, she began participating in bodybuilding competitions.

Apart from her business ventures and her presence as a sensational face on social media, Sommer Ray is also known for some of her high-profile relationships.

Read more: ‘Never Have I Ever Star’ Benjamin Norris: Everything About His Family, Age, Girlfriend, and More

Relationship With Machine Gun Kelly and All the Controversies

Machine Gun Kelly, known as the famous singer was dating Sommer Ray before settling in a committed relationship with Megan Fox.

In March 2020, Ray confirmed their relationship and dating news through her social media, Instagram to confirm the news that spread quickly throughout the internet.

Well, MGK is quite open about his daily life activities, and not only on Instagram, but he has also shown it on his Twitter account by retweeting a picture of him and Sommer Ray kissing.

They were also seen attending a concert together.

The duo met in 2017, and they hit it off right away. They have also worked together for the TV series 'Wild ‘N Out.

Unfortunately, the boyfriend and girlfriend duo did not last long and was together for only three months.

It was not until this year that the Instagram model and influencer spoke about the recent split. And surprisingly, it came out that MGK cheated on Ray with Megan Fox.  Later, Ray revealed she was stood up by MGK and she could not believe the fact that Megan Fox being already married and had children, MGK would go date her and be in a romantic relationship with her.

Well, Sommer Ray was really angry and heartbroken by this and she as expressed herself in her tweets.

After her split with MGK, Sommer Ray was involved with Tayler Holder. Tayler holder is a famous TikTok persona similar to Ray, he is also considered an Instagram influencer as well.

Tayler Holder posted a video with Sommer Ray back in May 2020, that started all the rumors and speculations about them dating each other. In the video, Tayler Holder wrote ‘5.19.20’ which many of the fans assumed might be the date they started dating.

Well, all the assumptions were right as both the Instagram influencers have shared a lot of cute, sweet, and PDA-filled pictures, and TikTok videos of both. Later, in June 2020, they finally made an official announcement on their social media.

Later when Tayler Holder was approached by paparazzi, he stated that he and Sommer Ray were just friends.

Sommer and Bennett Spies Broke Up on Bad Terms?

It is with no surprise that Sommer Ray always comes in the Headline. It was very evident from her posts on her social media about her choices of men.

But their relationship ended as fast as it started, and if you guys feel that MGK and Sommer Ray’s relationship was controversial wait until you know what happened between them.

The couple specified as boyfriend and girlfriend loosened their ties way too soon.

Well. Sommer Ray and Bennett Sipes dated in 2018, and soon ended their relationship but also it ended in a very bad term.

Some sources confirmed that Bennett talked ill and badly about Sommer Ray on many occasions.

Even though they lived together and under the same roof, they split due to a major horrific drama but the two did not want to talk about it publicly.

The influencer and her new boyfriend Cole Bennett went Instagram official on July 2021. At that time, in his Instagram stories, the popular videographer posted a photograph kissing Sommer Ray which confirmed their dating.

From their stories on Instagram, it seems as if the couple’s relationship is new and it has been just a few months.

While they are yet to post pictures with each other on their respective Instagram handles, Cole Bennett ha has already been featured in Sommer Ray’s TikTok.