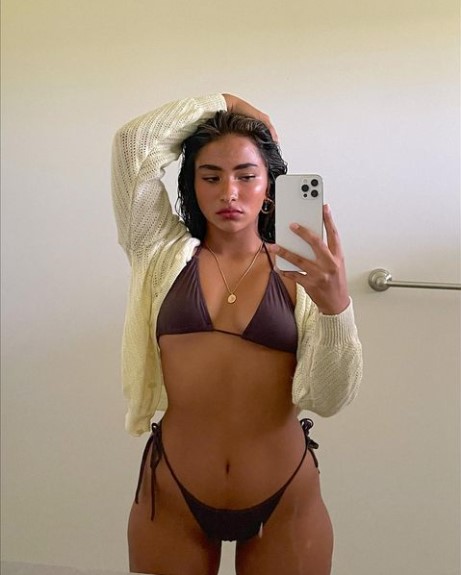 The creative, loving, and vibrant young woman, Sienna Mae is known for her body-positive TikToks. She is is a member of the content collective called the Hype House. The influencer is too a starring member of
streaming service and production company, Netflix's, upcoming Hype House reality series.

The young social media personality has also partnered with different brands. In 2021, Sienna announced she was the new face of Maybelline New York through her youtube channel. In addition, the young celeb is an entrepreneur who recently opened her clothing line as well. You can check out her website here SiennaMaeGomez.

Who Is Sienna Mae Gomez?

The influencer was born on January 16, 2004, in Laguna Niguel, California, the United States. As of 2022, the Tiktoker age is 18 years. Her zodiac is Capricorn and her nationality is American. Sienna's father's name is Ramon Gomez and her mother's name is Dina Gomez. The parents were very supportive of Sienna and constantly encouraged her to pursue her interests. Therefore, the Tiktoker grew up a performer; she was very invested in singing and dancing.

The star also has three other siblings; Micaela Gomez, Jacub Gomez, and the youngest Caden Gomez. Mother Dina shared a family picture on her Instagram back in 2021 where you can see the Gomez's have a fun time together. Sienna's parents also are on TikTok as Siennamaesdad and Siennamaesmom.

For her education,  Sienna went to high school alongside fellow TikTok stars Jack and James Wright.

Sienna joined TikTok in 2020 and then went viral in August of the same year when she posted a dance video under her @spicylatina account. The video consisted of the TikTok dancing in her kitchen with her stomach out, not giving two cents about the toxic unrealistic beauty standards imposed by society. Her video abruptly went viral for its body positivity message with even celebrities like Lizzo replying with “Body positivity has entered the chat!”. As of January, her follower count in the video-sharing app is 14.4M.

After Sienna blew up in the app, she was dubbed an influencer and even endorsed Maybelline cosmetics in 2021. Furthermore, Sienna too appeared in the video trilogy alongside Becky G, Julia Michaels, and Khea. Likewise, The Latina Tiktoker hosted a 2021 Song Breaker alongside social media star Larry which starred Lil Nas X, 24kGoldn, and other artists. Besides her partnership with Maybelline, she has also collaborated with IPSY, Levis, Aerie, Reebok, and Grubhub, to name a few. The star even appeared in Access Hollywood, British Vogue, Buzzfeed, and more.

The star who tasted success after her online stardom has amassed a net worth of 300 thousand dollars as of 2021. Sienna has accumulated her huge net worth in such a short period by playing in music videos, producing her merch, creating content for her social media pages, being the ambassador of various brands, and doing different photoshoots.  The star has also released her clothing line, Confidence Is Cute. This is what she had to say about it;

Her social media pages are one of the biggest contributors to her income. The star who rose to fame from Tiktok has 14M followers over there. In her Instagram account, she boasts of a massive following of 2M. She also has a Twitter account which she doesn't use much though. In Snapchat, Sienna has over 1.03M subscribers. The star is also popular on Youtube with a total of 352K subscribers.

Not much is known about Sienna's ex-boyfriends and dating history. It was alleged that Sienna dated the Tiktok star Jack Wright's friend in high school before calling it quits after she cheated on him two times. She also allegedly dated someone named @charrbanks on Instagram in 2020. Afterward, the star was presumed by fans to be dating Jack wright in 2021, by the looks of their intimate videos together. But it's been clear now that the duo was never once in a relationship. All of their videos were merely publicity stunts, which Jack clarified afterward.

Sienna isn't married to anyone and doesn't have a husband. There have been no shreds of evidence of the star having tied the knot in the past either.

What Happened To Sienna And Jack's Relationship?

The high school friends reconnected once again after both of them blew in Tiktok through their accounts. The pair then started to make cute couple-y videos together which garnered a huge amount of views likes and comments from fans. Nevertheless, despite fans bombarding them with the official confirmation of their relationship, the duo never validated it. In the late 2020s, the pair stopped posting videos altogether, boggling fans and leaving them with unanswered questions.

Finally, in May 2021, jack's friend Mason Rizzo, who has over 184,000 TikTok followers, slammed Gomez for sexually assaulting Wright numerous times even after he had set clear boundaries. In a since-deleted tweet, Rizzo posted a screenshot of a Notes app page that said

Rizzo continued that Sienna had a history of verbally accusing people. Even Jack's twin, James Wright, quoted Rizzo's tweet saying that's why he couldn't stay out of it. Soon after, Gomez began bleeding followers from her social media accounts. But Rizzo deleted his tweet before announcing the involved families would be dealing with the allegations offline.

Sienna released a video on June 2021 titled Addressing False Allegations. Another individual named Lachlan Hannemann posted a now-deleted TikTok that showed footage of Gomez sexually assaulting Wright, which Hannemann said he witnessed in the video which you can watch here. Gomez made a second response video stating she was a victim of "multiple attempts to cancel me and slander my name."

In January 2022, Wright posted a video on his Youtube channel and Tiktok page which confirmed the earlier allegations against Sienna. He explicitly mentioned how Sienna continued to sexually pursue him and molest him without his consent. Jack also accused his former collaborator of being very aggressive and repeatedly forcing herself physically on him.  He said Gomez would break into his house on multiple occasions to take advantage of him while he slept to a point it had become so normal. In a now shocking revelation, Jack mentioned how Gomez once picked up a lock to his hotel room and unlocked his bathroom door while he was showering.

thank you for giving me timeâ¤ï¸ the full video is on youtube. link in my bio. â™¬ original sound - jack wright

Jack has gotten immense support from fans and friends alike for opening up about the alleged harassment. You can see verified TikTok users like Mackenzie Ziegler, Skai Jackson, Dixie, Namela, and more commenting their support on the video Jack uploaded.