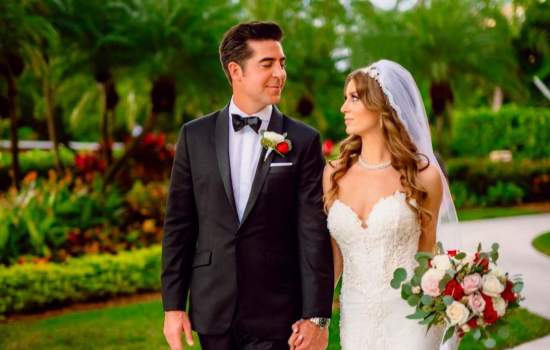 Emma DiGiovine has earned quite a fame due to her works as an American model and TV producer. However, what provided her with the huge limelight was her scandalous relationship with the renowned TV show host Jesse Watters.

The two colleagues’ secret relationship came out in public in 2017, and it created a huge drama in Watters’ personal life, as he was already married to another woman. As a result of the scandal, Watters split with his now-former partner and tied knots with DiGiovine.

Now, let’s learn the full story of DiGiovine and Watters’ scandalous relationship, how it affected their lives, and what the public thought about their relationship!

DiGiovine & Watters’ Affair Came Out In 2017

Everything was going fine in the life of the Watters’ World host, Jesse Watters, and the show’s producer, Emma DiGiovine. They were working together, and the show was running amazingly.

But, little did others knew that the colleagues had developed feelings for each other while working together. As time passed, their togetherness became stronger, and they started hanging out with each other even more.

The two maintained their affair very secret and thought no one knew about it. But the secret always comes out, right? In October 2017, through some unknown sources, the news about the producers’ and host’s secret relationship came out in the media.

After the news came out, Watters immediately informed the Fox News Channel’s HR department about his secret relationship with his colleague. Upon knowing that, the news channel allowed both of them to work in their company but in different shows.

After Watters and DiGiovine’s affair came out, a huge controversy knocked on their doorsteps. Both of them faced a huge backlash from the public. And, the most affected person from the affair was Watters’ long-time wife, Noelle Watters, and their two children, Ellie and Sophie Watters.

Just some days after the affair came out, Noelle Watters filed for divorce. Their divorce was finalized in early 2019, and the responsibility of the two children was given to both of them. Even after separating, they agreed to be friends and co-parent their twin daughters.

Even after that, the negative comments didn’t stop. So, Watters decided to avoid more backlash and settle down with the woman he had an affair with, aka DiGiovine.

DiGiovine And Watters Tied The Knots In 2019

Following Watters’ divorce from his first wife, the American commentator made a huge announcement, through his Instagram handle, on August 25, 2019. In the announcement, he revealed that he got engaged to DiGiovine.

The announcement post consisted of two pictures of Watters and DiGiovine. In the first picture, Watters was on his knee, proposing to his girlfriend with a shiny diamond ring. Likewise, in the second picture, the two were seen hugging each other on a beach.

On December 29, 2019, the engaged couple shared the wedding vows in a private ceremony. Only a handful of special guests were invited, including former U.S. President Donald Trump, Kelly Dodd, and Kimberly Guilfoyle.

Over a year after their marriage, on April 1, 2021, the married couple welcomed their first child together, a son named Jesse Bailey Watters Jr. As of now, they are relishing their parenthood.