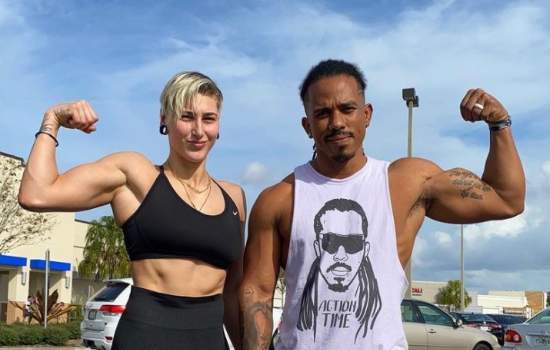 The Australian-born pro wrestler Demi Bennett, famous known by her in-ring name, Rhea Ripley, is living one of the most amazing times of her life. She is in a happy relationship, and just recently, on April 11, 2021, she became the WWE Raw Women’s Champion by defeating Asuka at WrestleMania 37.

Speaking more of Ripley’s personal life, she has been dating a fellow wrestler named Demetri Action Jackson. The two have been very public about their relationship ever since the former NXT Women’s Champion revealed her relationship status.

Rhea Ripley and Demetri Action Jackson have been dating each other for a long time, since late 2018. However, they managed to keep their togetherness a secret for a long time until Ripley decided to open up in late 2019.

On October 3, 2019, the WWE wrestler took to her Twitter handle to finally reveal her relationship. She posted an adorable picture of Jackson kissing her on the cheeks and captioned it, “The one that keeps me sane.”  Just a few moments later, Jackson replied to the tweet, writing, “Action approves. Love you, moshpit kid.”

On the same day, Jackson shared a funny picture of him copying his girlfriend’s serious-style pose. He captioned the picture stating that Ripley posts serious pictures whereas he posts funny ones. He continued by writing that he loves her with all his heart.

Following that day, the lovers have constantly been sharing pictures alongside each other through their respective Twitter and Instagram handles. Likewise, they are usually seen celebrating each other’s birthdays, special occasions, and festivals.

Most recently, on February 14, 2021, Ripley and Jackson celebrated Valentine’s Day. On that occasion, the former NXT UK Women’s Champion shared some funny yet cute pictures through her Instagram handle.

Considering all the love that the two have for their partner, it can be assumed that their bond is strong, and the wedding bells might not be far for them.

Who Is Demetri Action Jackson?

Many people know most of the details about Rhea Ripley due to the fame she has received as a renowned WWE wrestler. But, many might not know everything about her boyfriend, Demetri Action Jackson.

Demetri Action Jackson goes by the birth name of Kevin Ortiz and celebrates his birthday on the 5th of November every year. He is an Orlando, Florida resident who is of Puerto Rican descent. As for his family life, he is usually seen sharing pictures alongside his family members through his Instagram handle. Despite that, not much is known about his family, except that he has a brother named Jonathan Ortiz.

Going into Jackson’s career, he used to do weightlifting and has competed at the 2015 National University Championships. In addition to that, he also used to do competitive cheerleading, but he left it after a short while. He began wrestling around 2018 and has been since learning a lot of tactics.

You May Also Like: Henry Cavill Back on Dating Scene with New Girlfriend after Two Years of Singleness

As per his girlfriend, Ripley, Jackson is trying everything to be the best, and if he manages to enter WWE, then it would be only through his talent, not by her connection.