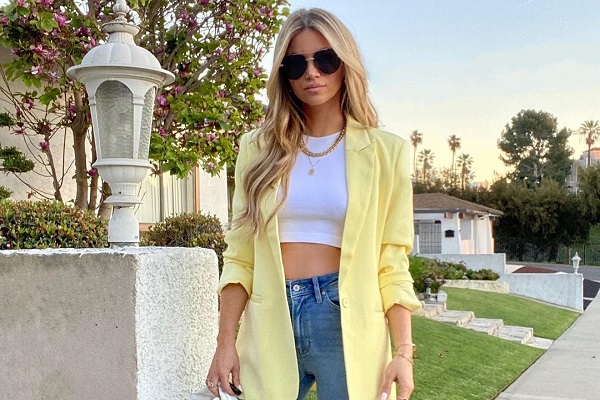 The American model, actress, and interior designer Amber Lancaster is best known for her role as Jenny Swanson on MTVs The Hard Times of RJ Berger. Besides, Amber also garnered fame for being a model on The Price Is Right. Amber's ex-husband is A.J. Allodi.

The duo separated in 2020. Since their divorce, fans have been concerned about the current love life of Amber Lancaster. So, if you are one of them, keep reading till the end.

Who Is Amber Lancaster? Short Details on Her Career

Born on September 19, 1980, in Tacoma, Washington, USA, Amber is 42 years old. Her full name is Amber Leigh Lancaster. Not much is known about Amber's parents, but she was the only child growing up. The model was studied at Franklin Pierce High School in Tacoma.

In 1998, Amber participated and won the title of Miss Washington Teen USA. She even was a professional dancer of Sea Gals which is the cheerleading squad of the Seattle Seahawks football team. Later, Amber moved to Los Angeles to pursue her career in acting and modeling.

Amber served as a model for CBS's show "The Price is Right," which was the longest-running television game show franchise. She joined the cast in 2008 and worked as the show's model to the current date. The Price is Right model had auditioned for the show's model and officially joined the show in its 36th season. At the time, four other newbies joined Amber in the show to work as a model.

Moreover, Amber worked as a trophy model at The 61st Primetime Emmy Awards in 2009.

Amber and Los Angeles-based businessman A.J Allodi were married in the past. The former duo first met each other through mutual friends; actor Justin Gaston and his wife, Melissa Ordway Gaston. Shortly, Lancaster and Allodi developed feelings for each other and began dating.

After dating for over ten months, the American model got engaged to A.J. Allodi on October 21, 2016; a year later, the duo got married in Palm Springs, California, on October 7, 2017.

Well, Amber Lancaster and A.J Allodi separated in September 2019. Their divorce rumors first surfaced in the media when Allodi was not seen on the social media posts of Lancaster. Initially, Lancaster used to post images with her then-husband on social media frequently but later stopped, which created divorce rumors.

Later, it was confirmed that Lancaster and Allodi divorced. The actual reason behind their separation was unknown, but Otakukart reports that Allodi cheated on his wife. It is unknown when the pair actually got divorced, but now, they are on their own way.

Did Amber Lancaster Have Child With Her Ex-Husband?

Amber Lancaster and her ex-husband have a child. The actress had shared that she was expecting her first child with Allodi in October 2019. However, during the course of her pregnancy, Amber developed preeclampsia, due to which her son, Russell Levi, got born two months before the due date. On August 3, 2019, Amber and A.J welcomed their first child into the world.

Who Is Amber Lancaster Dating in 2022?

The model is reportedly dating her new boyfriend, Shane Mouse. The exact date of when the duo started sating is not known. It seems like Lancaster now prefers to keep her personal matter away from the media prominence.

Besides, recent days saw rumors about Amber's pregnancy for the second time as well. However, these allegations seem to be false. So, we can say that Lancaster is now living a happy life with Mouse in private.

How Much Is Lancaster's Net Worth?

Amber Lancaster's net worth is estimated to be around $500K as of 2022. Lancaster has made her income through her career as an actress, interior designer, and model.

Furthermore, Lancaster is active on Instagram as @amberlancaster and has amassed more than 428K followers.