Is Bryce Hall Single? People Assume Him As Gay as His Kissing Video Goes Viral! Who Is the TikTok Star Dating? 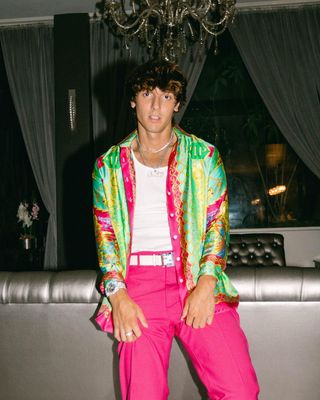 In the time of various platforms and technology with exciting social media, it is quite easy to gain fame and popularity.

Social media has become a great opportunity for people to showcase their talent and earn a good amount of fortune.

One of such people who gained fame and popularity by using the benefits of such a platform is Bryce Hall.

He has become a sensational personality among the fan base and has intrigued a curiosity regarding his personal details and his dating life.

The TikTok star, Bryce Hall previously made headlines for his relationship with Addison Rae.

Hall has become a household name when his fans dig into his love life, especially from his past relationship with Rae. So, this article covers most of his private details. Without further ado, let's get started!

Bryce Hall has kept his love life pretty obscure following which his fans have remained quite unknown about his romantic life.

Well, it's very difficult to believe that such a good-looking lad like Bryce Hall is single and we all believe that the handsome might be secretly dating.

His tweet back in February 2018 supports the possibility of having a girlfriend, but however, he has still kept the identity of his girlfriend a secret while he claimed that his girlfriend is pretty hot!

While the answer to this question is no, they are not together right now, Bryce Hall and Addison Rae have had some ups and downs together.

They dated a while and later split in 2019. Even after their split, the two stayed pretty closed together which led the fans to believe that the duo was secretly together.

However, a year later, the duo took their relationship to the next level and went public in 2020.

There they revealed what they had two months ago before and said they are cool friends and just vibing together.

Bryce Hall said they were not much on and off and both never really got into serious heartbreaking fights.

But even if they got into fights, Hall explained how both of them are so hardheaded and nice at the same time.

After their few months of togetherness, Addison Rae confirmed that she and Bryce had split in 2021. She added how both of them are not together but she wishes good regards and happiness to Bryce Hall.

While some also speculated that Bryce Hall cheated on Addison Rae yet nothing has been confirmed of that sort, it seems as if Addison Rae has moved on with guitarist Omer Fendi.

A picture that shows Bryce Hall kissing Ari Aguirre goes viral on July 23. It is still very unclear about the fact that who actually snapped the picture. Tana Mongeau, who was present during the get-together, also reacted to the image on her Twitter account.

She had captioned the picture as: “I turn my back for 1-second HAHAHAHAHA.” To reference this statement, Ari Aguirre also shared an Instagram story referring to Bryce Hall as his ‘boyfriend’.

In the video that got viral, Bryce Hall can be heard saying: “Remember when we kissed.” And to this, Ari replies, “Oh, it happened?” and following this comment, Bryce says, “Yes.” Due to such comments and activities, fans think that Bryce might be bisexual.

Is Bryce Hall Bisexual? Fans Speculate if the TikTok Star Is Gay

Many of their fans seem convinced that Bryce Hall might be bisexual due to such events that happened. Bryce had denied this while he reacted to this Vlog where he kissed other guys.

In the video, Bryce commented, “On a side note, I kissed 10 dudes for my last Vlog, and it flopped.”

When Bryce was asked why he did what he did, the TikTok star replied saying he is never doing it again cause it is not getting him any views.

Well, it might be possible that Bryce and Ari knew what they were doing and they both were being photographed and decided to play pranks on reporters.

As of now, Bryce has not yet said anything about the pictures but fans speculate of him being a bisexual.

Is Bryce Hall Dating Anyone?

It seems as if Bryce Hall is single at the moment and fans had speculated that Bryce was dating Riley after when the pair were seen together in several TikTok videos.

The duo had been creating a lot of content together which their fans have been noticing quite well.

Fans speculated it more when Bryce was spotted kissing a girl at a club. Many of them thought that the girl is Riley which Bryce Hall had kissed.

Well, it has not yet been confirmed about the rumors and as of now, it seems as of their dating is just a buzz.