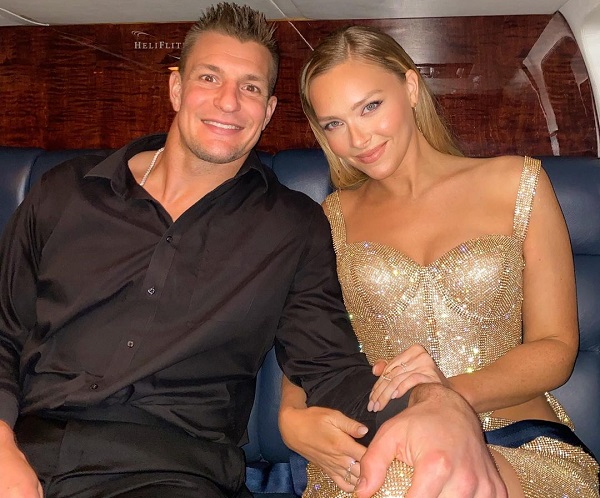 Camille Kostek is a well-known American model, television host, and film actress who shot to notoriety after emerging in the Sports Illustrated Swimsuit Issue. In addition to that, Kostek is also noted as the on-field host of the game show Wipeout on TBS.

Similarly, Kostek recently began working as a host of NBC's Dancing With Myself. Being an actress, Kostek has appeared in a few projects which include I Feel Pretty, Free Guy, and Monsters of California.

Well, Camille Kostek and her boyfriend, Rob Gronkowski, have been dating each other for a long time. So, they have seemingly been inseparable for years. Talking about their dating life, it began way back.

Previously, Kostek was a cheerleader for the New England Patriots. It is reported that Kostek booked the job in 2013, but it only lasted for two seasons. So, her short time on the team possibly had something to do with her meeting Gronkowski, who was in his 3rd season with the Patriots at the time.

While volunteering at the same Goodwill charity event in 2013, Gronkowski asked a teammate to slip Camille his number. Shortly, the duo started secretly dating due to the NFL's no fraternization rules. Initially, the pair kept their relationship confidential and kept it a secret for the first two years.

You May Read: Dixie D'Amelio and Noah Beck Relationship Timeline of Their TikTok Romance

Camille Kostek Went Public With Her Boyfriend in 2015

As we know, Camille Kostek and her boyfriend, Rob Gronkowski, kept their relationship private in the initial years of their dating life. Later, the lovebirds thought of sharing the happy news with the world.

So, in September 2015, Kostek went public with her boyfriend. The pair was spotted cheering the tight end on in the stands at one of Gronkowski's games. And their relationship news covered the internet when Kostek posted a sweet photo of the couple on Instagram.

Since then, they have come together in various public events. Back in July 2016, Kosten and Gronkowski walked on the red carpet at Nickelodeon's Kids' Choice Sports Awards. Furthermore, Kostek has talked openly about her relationship in various interviews.

Click To See: Gucci Mane & Keyshia Ka’Oir Are Expecting Their Second Child – More on Their Wedding!

How Camille Kostek and Rob Gronkowski Keep Their Relationship' Fresh and Fun'?

While giving an interview with Life & Style, Camille Kostek revealed how she and her boyfriend keep their relationship fresh and fun. While on the 2022 MTV VMAs red carpet, Kostek was asked about the topic, and the model said, a lot of the traveling allows the duo to do their own thing while supporting each other.

In the same interview, Kostek said they like to keep some of their details away from the media. Kostek says they are public with the ins and outs of their relationship; there is a lot that we keep private. So, it can be said that the pair opens up what they feel comfortable about.

As Kosten and Gronkowski have dated each other for a long time, questions regarding their marriage arise. A source reported that Kostek is ready to get married to her beloved boyfriend. So, fans can expect that the pair may get engaged soon, and they will surely share the happy news of their engagement and marriage in the future.

We wish them the best for their future.