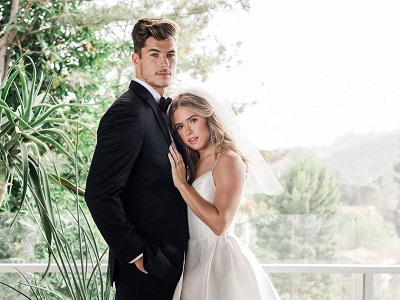 Kelianne Stankus is an American singer and TikTok star who is widely noted for being a member of the Acrobots. Acrobots is a group that performs routines on hoverboards. She has gained massive fan followings on social media.

If you are familiar with the life of Stankus, then it is sure that you are also updated with her love life. She has been together with her boyfriend turned husband, Chase Mattson, for quite a long time now. Mattson is a prominent model based in California who is associated with multiple modeling agencies, including LA Models Runway.

Stankus and Mattson have been together for over two years, and recently, the duo got married in a romantic wedding ceremony. So, if you are here to explore their relationship timeline and marriage, then you are at the right place.

Chase Mattson married his wife, Kelianne Stankus, and the newlywed couple told PEOPLE that their marriage was magical. They also reported that the twosome is happy to share the relationship of a husband and a wife.

Their romantic marriage ceremony was held at the Serendipity Gardens in Oak Glen. It was attended by their friends, family, and content creators.

Click To See: Nessa Barrett Tattoos Are Tributes to Her Boyfriend – Everything You Need To Know!

Chase Mattson met his wife in early 2020. Surprisingly, Stankus was the one who took the first step and talked with Mattson. They remained friends for a short time and went on their first date on May 9, 2020.

So, it was later confirmed that the duo was in a romantic relationship. After that, Mattson and his wife thought of taking their relationship to the next level and got engaged on December 12, 2020.

After they got married in 2022, people were concerned to know if the pair had already planned to have a baby. However, there is no such news about it, and the twosome has not given any hints yet. Meanwhile, Mattson is the father of two kids.

You May Read: Avery Cyrus and New Girlfriend JoJo Siwa Made Their Relationship Official – Here’s What We Know!

As we know, Chase Mattson is not new to being a father as he is the father of two kids whom he shares with his ex-wife, Devyn Jackson. The names of their kids are Hazel and Nora.

It is unknown when Mattson and Jackson separated, but it is believed that they may still have a good relationship. When Mattson and his present wife, Stankus, married, his daughters also attended wearing beautiful white dresses. They looked extremely cute, and their images can still be found on the internet.

On the other side, Mattson and his wife have not given birth to a baby yet. But in a reality show, the duo talked about their family planning. So, we can expect that Mattson and his wife, Stankus, will surely give updates in the future. To get updated on their life, we can follow the pair on social media.