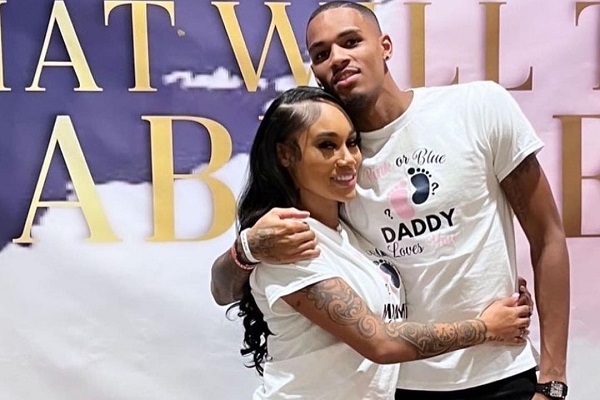 American model Jania Meshell is famous for posting selfies, fashion, and lifestyle photos on her Instagram. She has amassed more than 3.3 million followers on her IG handle. The social media star also serves as the brand ambassador of Fashion Nova.

In the same way, Meshell showcases her lavish lifestyle. Also, she promotes other brands. Apart from that, she gained people's eyes after having a relationship with NBA YoungBoy. They were in a relationship for some time. The former pair also had a son. So, Meshell often shares snaps of her son on Instagram.

Now, Meshell is again in the limelight as she just confirmed that she is pregnant. So, fans were surprised after learning that her new baby's father is none other than her current boyfriend, Dejounte Murray. So, keep reading to know about their relationship timeline and more.

Congratulation messages are pouring on social media to Jania Meshell as she recently announced her pregnancy news to the world. Meshell shared a photo on Instagram showing her belly. She captioned the image, "We're patiently waiting on our little Princess Murray, April 2023." Also. she tagged her boyfriend, Dejounte Murray, with whom she is welcoming their first child.

Looking at her image caption, we can say that Meshell and Murray will welcome their first child in April 2023. Likewise, they already have done a gender reveal session. The moment was captured and posted by BCK: Celeb Kids & More. The video posted on IG shows Meshell clutching a large balloon that Murray popped, and after the balloon burst, it spread pink papers noting they were expecting a girl.

Another clip showed teddy bear cupcakes in blue and pink shades. Moreover, this is not the first time Meshell will be a mother, as she has a son named Kacey Alexander Gaulden in her relationship with rapper NBA YoungBoy.

Jania Meshell has a son named Kacey Alexander Gaulden, whom she shares with her ex-boyfriend NBA YoungBoy. The former pair dated from 2017 until 2018. They had quite a nasty relationship. Apart from their dating life, their breakup got more attention.

Meshell used to vent about the rapper's toxic behaviors on her Instagram Live. After the relationship ended, NBA YoungBoy made a song named Truth About Herpes, claiming that Meshell gave him herpes. After that, Meshell wasn't pleased and reacted to the accusation via a series of tweets made on December 5, 2019.

Despite all the drama, they had a son and once Meshell also revealed that she did not want to have other kids. However, she is now going to be a mother for the second time. According to the Netline, she was also in a relationship with YBN Almighty Jay. Currently, she is happy with her new BF, Murray.

Jania Meshell and Dejounte Murray have been with each other for some time now. Their relationship began when Murray broke up with his ex-girlfriend, Jilly Anais. They developed in front of the public.