Jilly Anais Is Currently Dating NFL Star After Her Breakup With Ex-Boyfriend! Who Is He? 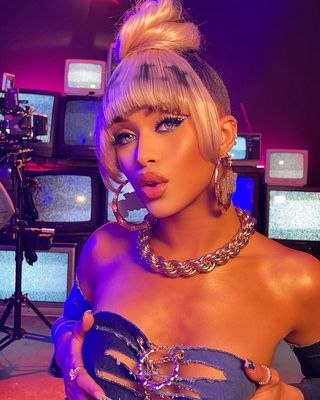 Anais is very popular in her country for her amazing voice and her choice of songs.

Jilly Anais has released a lot of her singles and music videos and made herself to the top of the music industry.

But not only this, but she has also launched a YouTube channel, where she has uploaded her music videos.

Some of her popular songs are Lemme know, NEW SAFE, Sexy, The Juice, and others. So, let’s dive into the diva’s personal insights.

Also read: Is Lexi Rivera and Andrew Davila Dating? How Do They Name Their Relationship? Friends or Lovers?

A lady with a multi-talented gene was born to her parents Jules K. Moor and Theresa Moor and was born and brought up in Houston, Texas.

The American actress, singer, and model Jilly Anais came into the limelight when she won the title of Miss Teen Houston in the year 2011. She also runs her own YouTube channel, where she has successfully released one of her very popular music videos, titled Sexy, which is a single track of Anais.

An American-Jamaican ethnicity holder shares a very tight-knit bond with her parents and looks up to her father like her guardian angel. She considers her father as the backbone of the family.

As Jilly expresses much love and regards to her father on social media, posts a cute father-daughter throwback picture. Jilly Anais does not hold herself from expressing love and care to her beloved father.

Well, she can be seen wishing her father a very happy fathers day by posting an old father-daughter moment from her childhood days. She does relish a wonderful bond with both her parents.

A famous professional basketball player, Dejounte Murray was her ex-boyfriend and they were quite a duo to be gossiped about. Murray plays for the San Antonio Spurs of the National Basketball Association (NBA) and earns a pretty eye-catching salary of 1.5 million per season.

Later, the couple separated their ways when Murray blatantly called his then-girlfriend Jilly Anais a “gold-digger” on his Instagram. Many of Murray’s fans called her out publicly and posted a story to degrade Anais.

In a cold war, the former Miss Teen Houston reached to her social media handle, Twitter where she expressed a strong statement and called out her ex saying he didn’t pay for anything.

Presently, there is no remark of the tweet whatsoever, as she deleted it after some time and moved on from the damages.

Jilly Anais is currently dating Deshaun Watson since 2019, July. As per records, Watson is an American football quarterback for the Houston Texans of the National Football League (NFL).

In a YouTube video, that was published on April 10, 2020, the couple sat down together and shared all the details of how the two met for the first time, their thoughts, and reactions.

The NFL Star candidly revealed how they saw each other for the very first time at a restaurant during the night hour and waved at each other.

Anais also added by saying how they texted each other on their private Instagram accounts for many days and since then, the heat between them escalated that eventually leading them t date each other.

On September 25, 2020, Jilly Anais wished her current boyfriend a very happy birthday by posting their picture together on her Instagram handle.

She also wrote a cute caption calling her boyfriend her love bug and how much she loves him immensely.

This is itself a clear proof that how close and special they share the bond together and we hope it lasts forever!

Also read: Jack Harlow's Dating History! Does He Have a Girlfriend Now? All About His Ex-Girlfriends

We can look at her gorgeous feed on Instagram with the username @jillyanais where she has 2.5 million followers and has posted around 1452 pictures and videos.

As Jilly Anais is very famous for her work n different expertise, according to the 2020 survey, she earns an estimated net worth of $2 million.

She earns her fortune through her hard work, dedication, and her exceptional multi-tasking work.