Who Is Kathy Fang? Meet His Husband and the Food Network Star Has Her Own Dynasty at Home 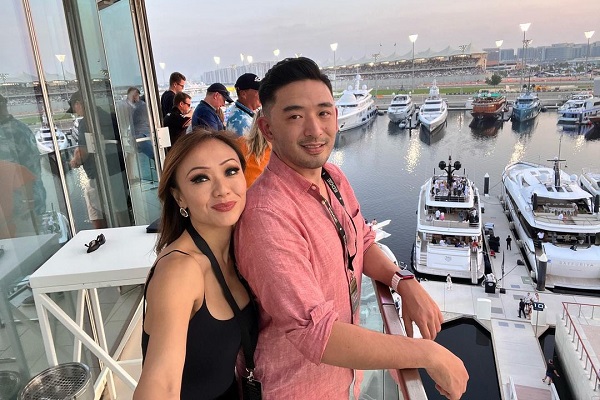 Chef Dynasty: House of Fang is a new Food Network docuseries that unveils the behind-the-scenes dynamics between Chef Kathy Fang and her restaurant's staff. The new series also looks at the legacy of a father-daughter duo in the restaurant industry. Kathy is a culinary chef and restaurateur who co-owns the famous San Francisco restaurant Fang with her dad, Peter Fang.

Her dad is also famous as the godfather of Chinese cuisine. The father-daughter duo will create delicious dishes representative of their culture and heritage and challenge conventional culinary ideas at Fang. They offer a fresh take on dishes influenced by both Northern and Southern China's cuisine.

Additionally, Kathy has already made her own dynasty at her home. She is a married woman, and with her husband, she has started a family of their own. So, keep reading to learn everything about chef Kathy's personal life.

Caleb Sima is the loving husband of Chef Kathy Fang. Sima is a big name in the tech industry. He is the co-founder and CTO of SPI Dynamics. It is a web application security products Company and has more than 12 years of security experience.

According to his Linkedin bio, Sima serves as the Chief Security Officer of Robinhood. He has been taking the role since February 2021. Before that, he was a VP of Security at Databricks. Likewise, he was a board member at Cobalt.io. For more than one year, Sima also worked as a managing vice president at Capital One.

His professional career began in 1996 when he worked as a security manager at S1. After that, Sima served at multiple companies, including Internet Security Systems, SPI Dynamics (acquired by HP), Hewlett Packard, Armorize Technologies, Inc. (Acquired by Proofpoint), Andreessen Horowitz, and Bluebox Security (Acquired by Lookout).

Furthermore, we can find Sima active on Twitter under the username @csima, and his account is also verified.

Kathy Fand and Caleb Sima are a powerful couple who have been supporting each other for over a decade. The married couple reportedly began dating around the 2010s. Fang met her husband in San Francisco.

Fang and Sima dated each other for some years. Sima took the first step to take their relationship to the next level. So, he proposed to Fang in 2014. After a failed attempt at proposing during their Paris trip the year before, Sima attempted again in San Francisco. To that special moment, Sima enlisted one of Fang's favorite chefs, Chef Gary Danko, to help him surprise Kathy with a faux holiday party.

Later, Fang realized the event wasn't a typical party for VCs. Sima led her to believe and admitted it was a ploy to ask Kathy to marry him. After that, Sima proposed to Fang, and she accepted the proposal. Following the amazing engagement, the duo got married, and now, they live happily.

You May Read: Liz Shanahan Is Married to Her Famous Husband Michael Symon! More About Her Age and Children

Kathy Fang and Caleb Sima Are Parents of Two Kids

Kathy Fang shares two children with her husband, Caleb Sima. Shortly after being married, the duo welcomed their first child, a daughter named Ava. The family of three was living happily, and Chef Kathy also used to share snaps on Instagram.

Likewise, the family of three was increased when another child, a son named Neo, was born in 2020. Kathy often features her husband and children on her Instagram page, where we can find her active as @chefkathyfang.